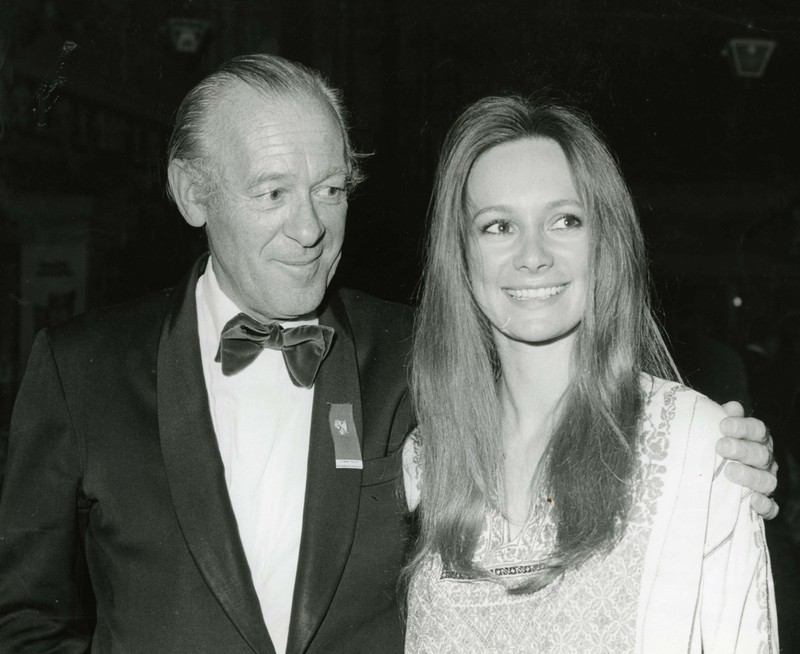 This is a black and white photo of the English playwright and screenwriter Michael Pertwee and the English actor Francesca Annis. Pertwee, in a dinner jacket with a Cork Film International ribbon pinned to its left lapel, is turned towards Annis with his arm around her shoulders. He was an English playwright and screenwriter from a prolific family of actors including his father the actor and playwright Roland Pertwee, his brother the actor Jon Pertwee, best known for his Dr Who, and his nephew the actor Sean Pertwee. As well as TV work Michael Pertwee’s screenwriting credits include Richard Lester’s A Funny Thing Happened on the Way to the Forum (1966) with an award-winning score by Stephen Sondheim and One More Time (Jerry Lewis, 1970) starring Sammy Davis Jr. At the time of this photo, dated 1972, he had just finished Digby, the Biggest Dog in the World (Joseph McGrath, 1973) with an all-star cast including Spike Milligan and Milo O’Shea.

Annis, in a light-coloured cheesecloth tunic, was in Cork with her co-star Jon Finch from Roman Polanski’s Macbeth (1971). She started acting as a teenager with Cleopatra (Joseph Mankiewicz,1962) starring Elizabeth Taylor and went on to have a prolific film career including roles in Krull (Peter Yates, 1983), Dune (David Lynch, 1984) and the directorial debut by Prince, Under the Cherry Moon (1986). Her most recent film King of Thieves (James Marsh, 2018) is based on the Hatton Garden safe deposit heist, starring Michael Caine, Tom Courtenay, Michael Gambon and Jim Broadbent.