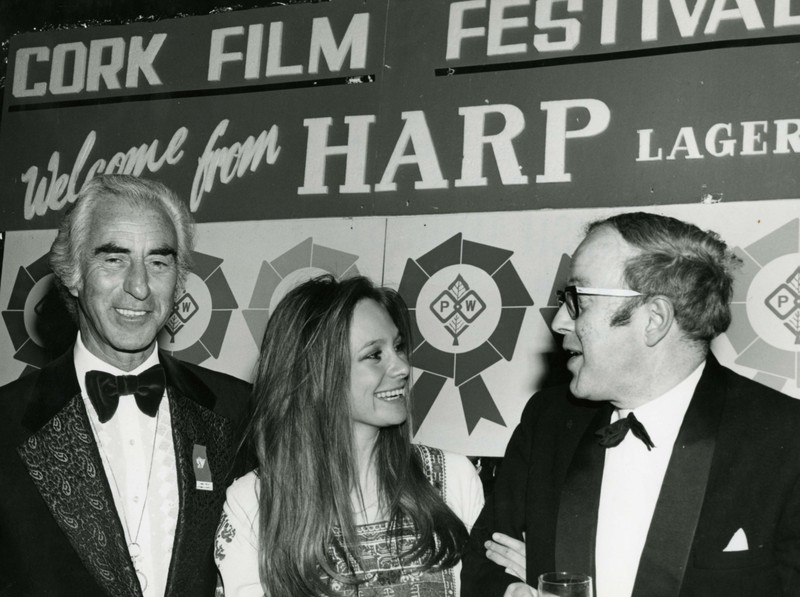 This is a black and white photo of the actor Francesca Annis with the actor Ferdy Mayne and Brian O’Connell. The three are standing in front of hoarding advertising the Harp Lager-sponsored festival. Annis, wearing a cheese-cloth style tunic, is turned to O’Connell chatting while Mayne smiles directly at the camera.

O’Donnell, in dark-rimmed glasses, might be the legendary Cork publican Brian O’Donnell of the tiny Hi-B bar on Oliver Plunkett Street in Cork. Infamously he would throw you out of his bar, located at the top of a somewhat dilapidated staircase, if you took a call on your phone or caused him consternation in any way. O’Donnell died in 2019 attracting warm tributes from Cork and beyond. (Dan Buckley, ‘Friends in Hi places lie low when Brian’s on warpath,’ Irish Examiner, 01.12.2012; Barry Roche, ‘Tributes paid to eccentric Cork publican Brian O’Donnell,’ irishtimes.com, 16.12.2019.)

Francesca Annis is an English film and stage actor born in 1945 who began acting when she was a teenager. She has a prolific film career and films include Cleopatra (Joseph Mankiewicz,1962) when she was age 16, with Elizabeth Taylor; Krull (Peter Yates, 1983), Dune (David Lynch, 1984) and the directorial debut by Prince, Under the Cherry Moon (1986). At the time of this photo she had just completed Macbeth (1971) directed by the Polish-French film director Roman Polanski, whose wife, Sharon Tate, had been murdered recently in Hollywood by the Charles Manson family.

Annis is shown in this picture with Ferdy Mayne, who also worked with Polanski in The Fearless Vampire Killers (Roman Polanski, 1967) starring Sharon Tate whom Polanski married the following year. Mayne had a prolific film and theatre career and achieved international recognition for his various portrayals of suave criminals, Nazi officers, or Hammer horror roles including Where Eagles Dare (Brian G Hutton, 1968), and The Vampire Lovers (Roy Ward Baker, 1970) starring Kate O’Hara and Dawn Addams, who was a regular visitor to Cork in the early days of the film festival with her then-husband Prince Vittorio Massimo. Mayne later featured in Trip to Vienna (Edgar Reitz, 1973) with Hannelore Elsner, who also came to the Cork festival.