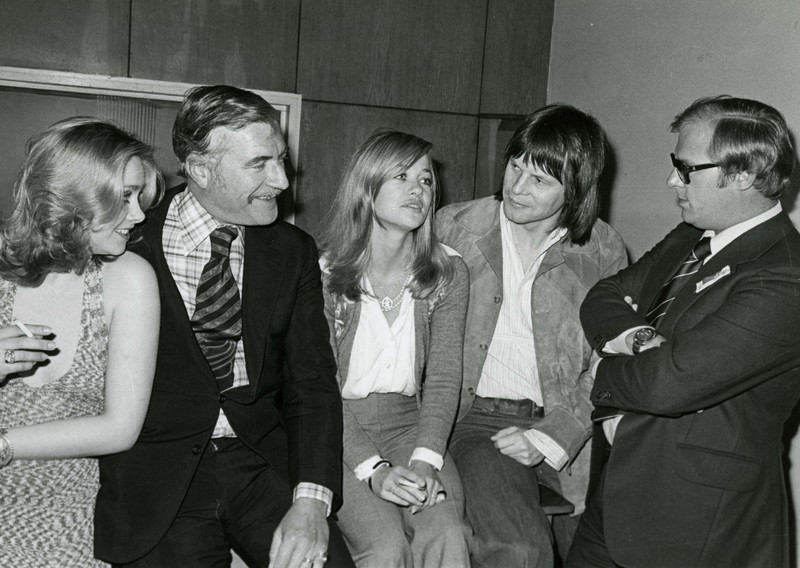 This is a black and white photo of festival delegates including the director Terry Gilliam, actor Linda Hayden, former film censor Sheamus Smith and unidentified companions. The convivial group are shown in a huddle in conversation; Gilliam and his companions are sitting on a table resting up against the wall while Sheamus Smith, arms folded, stands and listens to them.

Smith was a producer and director at RTÉ around the time of this photo (1970s) before being appointed managing director of Ardmore Film Studios in 1975. He was instrumental in setting up the Irish Film Board and was later appointed Irish film censor, going on to become Ireland's longest-serving film censor in the history of the State from 1986 to 2002. Smith published his memoir Off Screen (Gill & MacMillan) in 2007.

We know Terry Gilliam as part of the Monty Python troupe and the long-running BBC sketch comedy Monty Python’s Flying Circus (1969-1974), which relied heavily on his surreal animation skills. Around the time of this photo in the 1970s, Gilliam had co-directed Monty Python and the Holy Grail (with Terry Jones, 1975) and soon after directed Jabberwocky (1977), based on Jabberwocky by Lewis Carroll, and starring Michael Palin. He has been nominated a number of times for an Academy Award for Brazil (1985), The Fisher King (1991), 12 Monkeys (1995), and The Imaginarium of Doctor Parnassus (2009).

Linda Hayden, on the far left of the photo in a knitted halter-neck dress, and holding a cigarette, came to Cork on a number of occasions and often features in the festival archive photographed with fellow actor Lynda Bellingham, with whom she starred in a series of Confessions movies based on the series of risqué best-selling paperback books by Christopher Wood. Co-produced by Greg Smith and the Irish director Norman Cohen they include Confessions of a Window Cleaner (Val Guest, 1974), and Confessions from a Holiday Camp (Norman Cohen,1977) which starred both Bellingham and Hayden. She also appeared in horror movies including Hammer’s Taste the Blood of Dracula (Peter Sasdy,1970) starring Christopher Lee, and The Blood on Satan’s Claw (Piers Haggard, 1971).