Trevor Rhone and delegates at a press conference 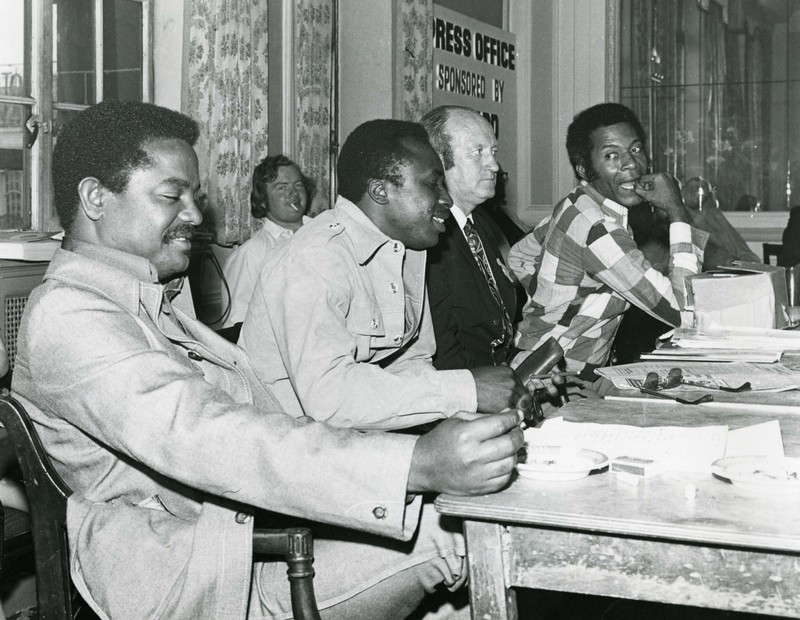 Trevor Rhone and delegates at a press conference

This is a black and white photo of a festival press conference, with the Jamaican playwright Trevor Rhone and his colleagues in attendance. Rhone, resting his chin on his right hand, is seated at the top of the table in a checkered shirt, his lean physique is turned towards his (unidentified) companions at the table who are smiling while looking down at the table. The table is littered with papers, cigarettes, ashtrays, and a pair of sunglasses. Behind them, we note the Press Office poster tacked to the wall, next to a man with a cigarette in his mouth who catches the flash of the camera with a smile.

Trevor Rhone was in Cork for his successful film The Harder They Come (Perry Henzell, 1972) which he co-wrote with Perry Henzell. (The back of the photo notes that this group includes Perry Henzell, but he isn’t in this picture.) It was the first Jamaican-produced feature film and introduced reggae music to an international audience, becoming a cult hit in the process. Rhone’s later filmography includes Milk and Honey (Glen Salzman, Rebecca Yates, 1988) and the Cannes Film Festival ‘favourite’ award-winning One Love (Trevor Rhone, 2003), starring Ky-Mani Marley – the son of Bob Marley. In addition to his film work, Rhone lectured in Jamaica and various American universities including Harvard; his contribution to Caribbean cinema is profound. Rhone died from a heart attack at the age of 69 in 2009 and is buried in Jamaica. (David Katz, The Guardian, 23.09.2009; B.Paddington and K.Q.Warner, ‘The Emergence of Caribbean Feature Films’, Black Camera, Winter 2009, pp.91-108.)