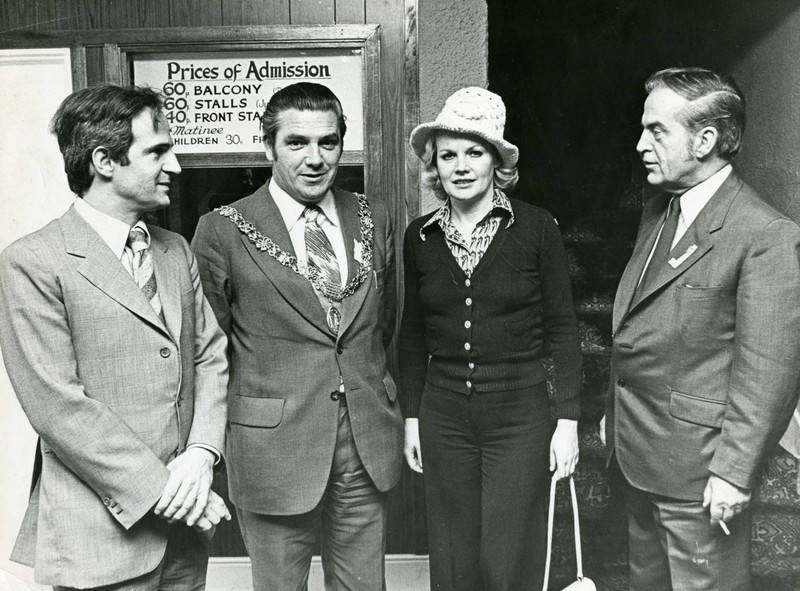 This is a black and white photo of the French film director François Truffaut with Lord Mayor Pat Kerrigan, American actor Carroll Baker and festival director Dermot Breen. All four are standing in front of a cinema ticket office advertising the price of admission (60 pence for a seat in the balcony and stalls, 40 pence for a seat in the front stalls and 30 pence for children). Truffaut on the left is turned towards Breen and the others, while the Lord Mayor, in his mayoral chain, and Carroll Baker, wearing a dapper crochet hat, face the camera.

Pat Kerrigan was Lord Mayor of Cork from 1973 to 1974. He was an Irish politician and trade union official affiliated with the Labour Party. After failing to win a seat in the 1969 and 1973 general elections he was nominated to the 13th Seanad by Taoiseach, Liam Cosgrave, where he served until 1977. He won a seat for the Cork City constituency in the 1977 general election and took his seat that year before dying two years later, age 51.

In this picture Kerrigan is standing next to the American actor Carroll Baker. Born in 1931 Baker was a well-regarded Academy nominated actor best known for her career-defining role as ‘Baby Doll’ Meehan in the 1956 film Baby Doll directed by Elia Kazan. Her films include The Big Country (William Wyler, 1958) and How the West Was Won (John Ford, Henry Hathaway, George Marshall, 1962) and the George Peppard romance The Carpetbaggers (1964). Despite her success, she had a difficult relationship with the studios, such as Warner and Paramount, whose contracts tied her to work for them whatever her wishes. Baker left Hollywood in the late 1960s and moved to Italy working in Italian thrillers and horror movies which allowed her work outside the constraints of the Hollywood moral code as well as her probable blacklisting by the studios.  At the time of this photograph Baker had filmed the leading role in Corrado Farina’s horror film Baba Yaga (1973). The Italian director Farina was also at the festival (and was on the Jury) and it is probable that they were promoting Baba Yaga that year.

François Truffaut (1932-1984) was a French film director, screenwriter, producer, actor and film critic at Cahiers. His career spans forty years of filmmaking and in 1959 his autobiographical film The 400 Blows, with Jean-Pierre Léaud, ushered in French New Wave (La Nouvelle Vague) cinema with the rejection of traditional film-making structures. His filmography includes Jules and Jim (1962), the non-French speaking Fahrenheit 451 (1966), and The Story of Adèle H. (1975) with Isabelle Adjani for which she was nominated for a Best Actress Oscar. Around the time of this photograph Truffaut had released Day for Night (1973) which won him an Oscar for Best Foreign Film. His final film was Confidentially Yours (1983) which he made as an homage to his favourite director Alfred Hitchcock. He died a year later, age 52, from a brain tumor and is buried in Paris.

This item is licenced with a Creative Commons Attribution NonCommercial-NoDerivatives 4.0 International (CC BY-NC-ND 4.0) licence. All rights reserved. Please credit Cork International Film Festival & provide a link back to this site.