Linda Hayden with a trophy 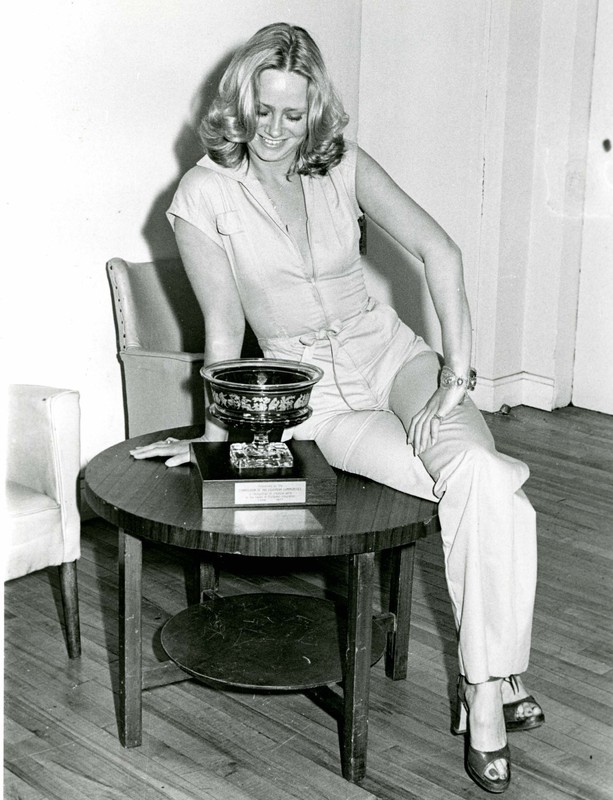 Linda Hayden with a trophy

This is a black and white photo of the English actor Linda Hayden posing with a trophy. Hayden, in a light-coloured jumpsuit, sits on the edge of a small round table looking down at the enamelled glass-trimmed trophy which sits on a wooden base with an inscribed plaque. As far as we can determine the trophy is engraved Presented by the Commission of the European Communities, and might be presented to the festival as part of the Commission’s support of the festival through their Creative Europe MEDIA programme.

Linda Hayden came to Cork on a number of occasions and was a favourite of the photographers, often photographed with fellow actor Lynda Bellingham with whom she starred in the Confessions series of movies. Born in 1953 she was best known for her roles in British horror films and sex comedies such as Confessions of a Window Cleaner (Val Guest, 1974), Confessions from a Holiday Camp (Norman Cohen, 1977) and the ‘video-nasty’ Exposé (James Kenelm Clarke, 1976) which was re-released with cuts, as Stalker (Martin Kemp, 1997). Controversially Hayden appeared, age 15, in the 1968 British drama film Baby Love (Alastair Reid) in which she acted the part of a young girl who seduces her adoptive family after her mother commits suicide. She would have been too young to see her own movie which was rated X in British cinemas and abroad. The New York Times noted that Baby Love was: “… meaningful and even moving. Baby Love however is basically a chiller, like the dripping water with the initial credits – a drop, a trickle, and a cold flow.” She followed this foray into horror films with Hammer’s Taste the Blood of Dracula (Peter Sasdy,1970) starring Christopher Lee, and The Blood on Satan’s Claw (Piers Haggard, 1971) before making her name with the Confession comedies so beloved of the seventies.

Hayden was the partner of the actor Robin Askwith for some time in the 1970s who also starred in the Confessions sex comedy series. Askwith would be the best man at the wedding of Lynda Bellingham and the film producer Greg Smith’s wedding – both of whom were at the Cork Film Festival in the 1970s. (Howard Thompson, ‘Chilling Baby Love’, The New York Times, 20.03.1969.)