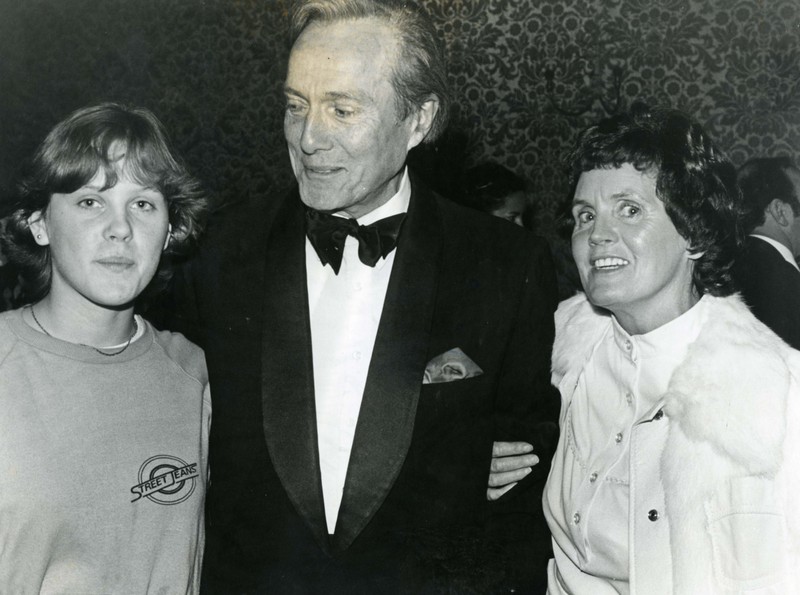 This is a black and white photo of the American actor Hurd Hatfield standing with two festival guests from Ballinlough in Cork. Hatfield, in a dress suit, is smiling as he looks to his right at his young companion. On his left a lady, in a white fur-trimmed jacket, smiles broadly at the camera.

This is the only image we have of Hurd Hatfield in the archive and is particularly special because his name is forever associated with Cork in the naming of Hatfield House on Tobin Street. Hatfield House was the headquarters for the Cork film festival for many years and was named for Hurd Hatfield who was a friend of the festival. Hatfield House is now the home of Barbara Hubert Hand Bookbindery. Tobin Street itself is the home of the Triskel Arts Centre which is attached to the medieval Christchurch which fronts onto South Main Street. In 1984 excavations on this narrow street revealed medieval layers constituting backyards of houses that once fronted onto Tobin Street.

Hurd Hatfield (1917-1998) was born in New York City, studied drama in London, but eventually made his home in East Cork after visiting his friend, the actor Angela Lansbury, whom he met on the set of The Picture of Doran Gray, and who lived in nearby Conna. He restored the 13th-century Ballinterry House and spent the last twenty years or so of his life there. He made his name in Hollywood after playing the title role of Dorian Gray in the MGM film The Picture of Dorian Gray (Albert Lewin, 1945). His filmography includes The Diary of a Chambermaid (Jean Renoir, 1946), The Beginning or the End (Norman Taurog, 1947), Mickey One (Arthur Penn, 1961) with bit parts in movies such as The Boston Strangler (Richard Fleischer, 1968) and Her Alibi (Bruce Beresford, 1989).

Interestingly Hatfield was a student of the Russian-American actor and teacher Mikhail Chekhov, nephew of the playwright Anton Chekhov, and would perform extensively with his company in the former Soviet Union. His link with Russian culture was profound and on his death bed in Cork, he was attended to by a Russian Orthodox priest. ('Manhattanite of many parts,' irishtimes.com, 08.01.1999; Ronald Bergan, 'Hurd Hatfield obituary: the face behind Dorian Gray,' The Guardian, 05.02.1999.)