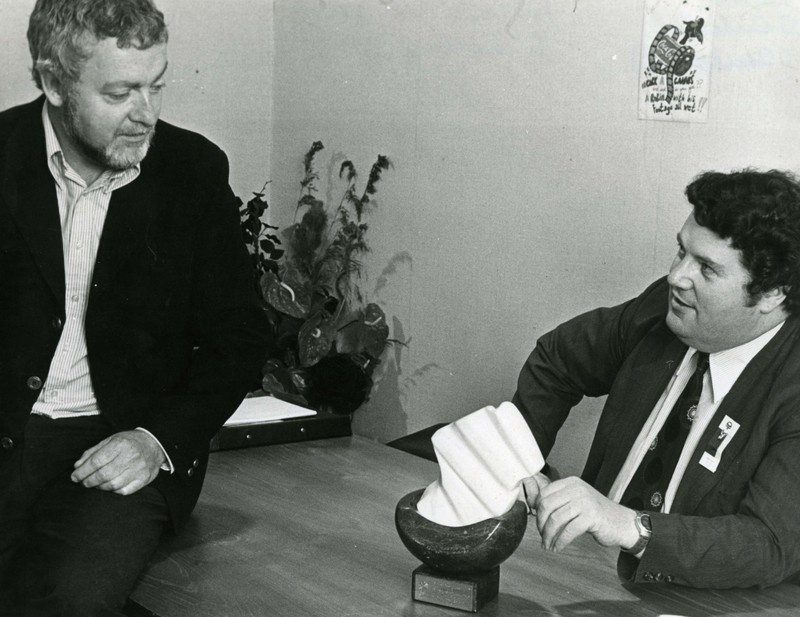 This is a black and white photo, taken during the 1980s, of the sculptor Patrick O’Sullivan in conversation with festival director Robin O’Sullivan. Patrick O’Sullivan is sitting on Robin O’Sullivan’s desk who is looking up at him as they talk. A small stone sculpture, which might be a festival award, sits on the table between them and behind them, pinned to the back wall, we note a hand-drawn cartoon of a robin on top of a Coca-Cola can wrapped in film reel.

Patrick O’Sullivan (1940-2015) was born in London to Irish parents and studied sculpture in England before moving to Cork in 1971. He lectured in sculpture at the Crawford College of Art and Design and during the time of this photo, dated 1980s, he was Head of Sculpture, a post he held from the 1980s to 1990s. O’Sullivan’s work, in marble, wood and bronze, has been exhibited around Ireland and his commission, City, made from Kilkenny limestone, was placed on the South Mall in Cork as part of the Cork 800 sculpture symposium in 1985.

Patrick O’Sullivan was a member of Aosdána. Established in 1981, Aosdána was set up by the Arts Council to honor artists whose work has contributed to the arts in Ireland. Membership is by peer nomination and is limited to 250 living artists who have produced a distinguished body of work. Fellow artist and Aosdána member Michael Quane speaking of O’Sullivan notes that: "Patrick O’Sullivan was always insightful and never failed to challenge. Like his work, he too in his personal style was quiet, quizzical, and enigmatic. All those who came within his reach, within his department, were often left guessing, questioning, perhaps occasionally exasperated, but always some way altered. That he changed, in some way, the world with which he came into contact, in such a non-didactic way, is a fine and worthy legacy for the quiet man and artist that Patrick O’ Sullivan was." (Arts Council 6.1.2015)