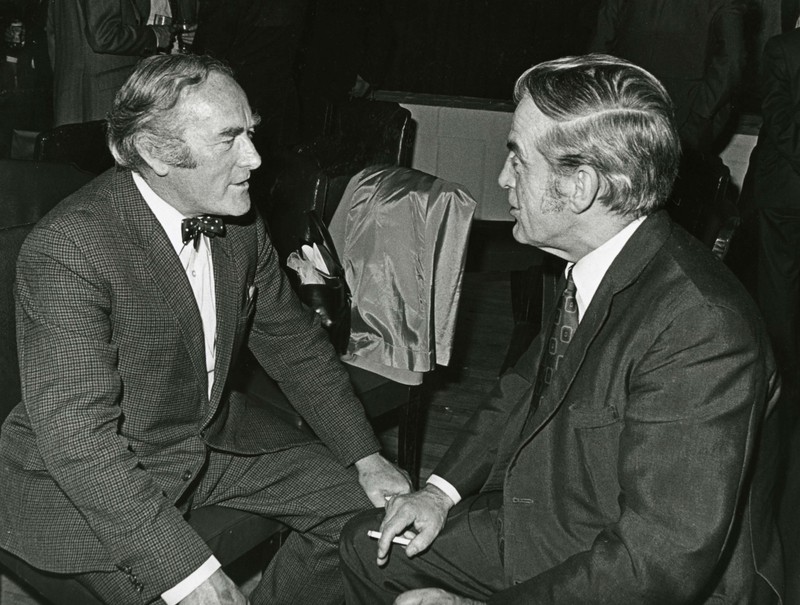 This is a black and white photo of the festival director, Dermot Breen, in conversation with the artist and journalist Frank Sanquest.

Breen, with a cigarette in hand, was a colleague of Sanquest for many years – they would have come across each other in Cork through their involvement with the theatre. For example, when the Cork Opera House burnt down in 1954 the Palace theatre, then managed by Dermot Breen, stepped in offering its stage to the Cork Operatic Society. Sanquest was then set-designer for the Cork Opera House and the Cork Operatic Society. By the late fifties Breen gave up managing the theatre in order to run the film festival and his job at the Palace was taken over by Dan Donovan.

Frank Sanquest was also a journalist for the then Cork Examiner and worked as its arts editor from 1940 to 1987. He was the father of five children with his wife Rose, including the artist Kevin Sanquest and the writer Rosalind (Roz) Crowley. In 2009 Kevin Sanquest created a national portrait collection in Fota House, Carrigtwohill, Cork, titled Inheritance – Honouring the Cork Legacy; he passed away in 2013. Interestingly Kevin Sanquest was the first manager of the Cork music legend Rory Gallagher and the band Taste. His sister, the journalist and author Roz Crowley, refers to the legacy of Rory Gallagher in her book Macroom Mountain Dew – Memories of Ireland’s First Rock Festival (OnStream Publications Ltd., 2016). (‘Frank Sanquest obituary: All-round artist with a love for the theatre,’ irishtimes.com, 12.01.2008; Vera Ryan, Dan Donovan: An Everyman’s Life, The Collins Press, 2008; Barry Roche, ‘Book marks 40th year of Macroom Mountain Dew Festival,’ irishtimes.com, 15.06.2016.)