Cork Opera House with an inflatable gorilla on its roof 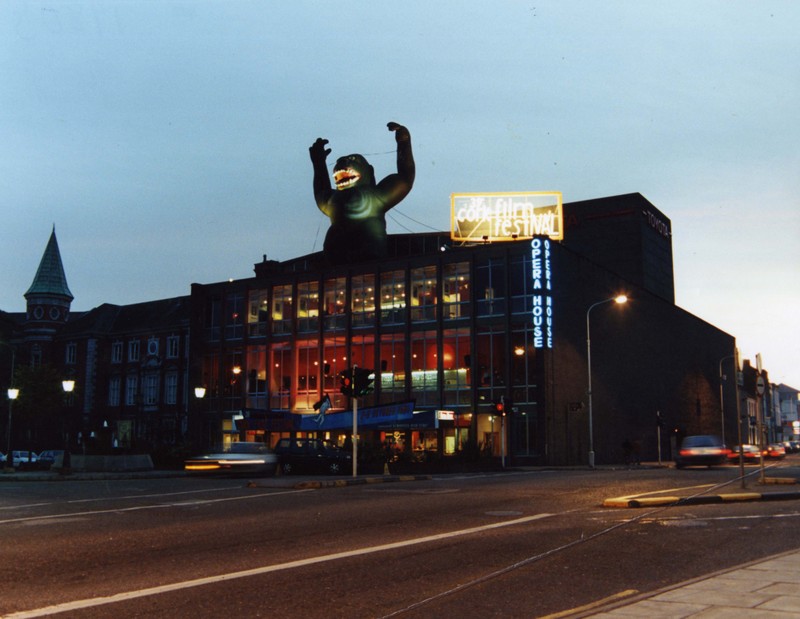 Cork Opera House with an inflatable gorilla on its roof

This is a colour photograph of the Cork Opera House in a night time scene with an inflatable gorilla on its roof. The photo shows the Opera House lit up in neon lights advertising the film festival. The long exposure of the shot lights up the light trails of the traffic along Lavitts Quay on the right. While this photo is marked 1980s the large gorilla probably references the imagery of the 1994 Cork Film Festival, for which the artist Kieran O'Connor designed a poster and programme cover showing 'King Kong' standing on top of the Shandon Bells & Tower of St Anne's Church in Shandon, Cork.

The façade of the Opera House has changed since this photo was taken and in 2003 renovation works on the façade of the building and the surrounding Emmet Place were completed. Emmet Place, at the entrance to the Opera House, has since been redeveloped into a plaza-like square. The fly-tower, seen behind the neon sign in this photo, is still in place however. For many years it provided the backdrop to the iconic Toyota roof sign which occupied 3 sides of the tower on the north, east and west. The Toyota sign has since been replaced by UCC signage in a new collaboration with UCC and the old Toyota letters, at 1.5 metres tall, were recommissioned by the Greek artist Bill Balaskas whose work 'Red Air' transformed the six Toyota letters into a public art installation. The film festival moved to the Opera House in the mid-eighties whilst under the stewardship of Mick Hannigan and Theo Dorgan, after negotiations with the Opera House manager Dick Hill. Around this time Charlie Hennessy, the festival chairman, secured funding from Ford Ireland, just before it closed down, providing the festival with an injection of funding along with the Irish Film Board and RTÉ. In 1985 the festival opened at the Opera House offering Cork an alternative 1000-seated venue for its screenings.