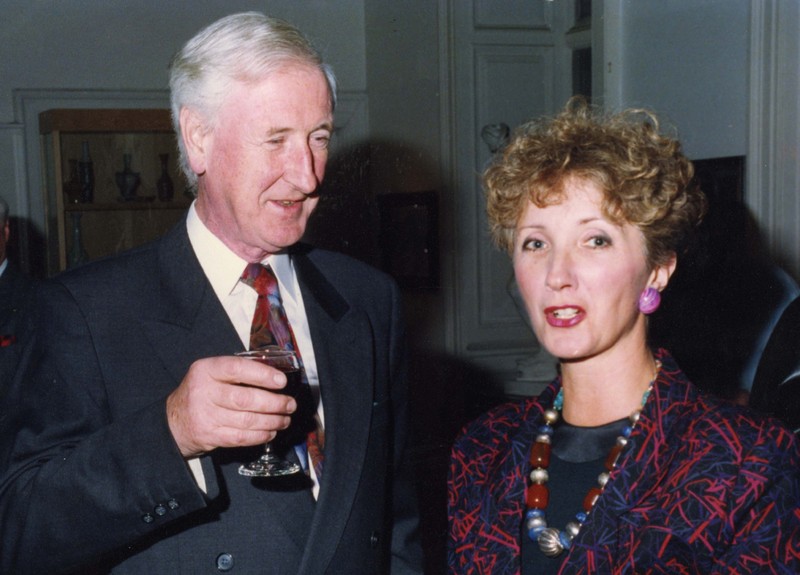 This is a colour photo of the Irish poet John Montague with an unidentified companion at a drinks reception. The photo is undated and uncredited but is of value to the archive given the legacy of Montague to poetry and his affiliation with the film festival through his friendship with the poet Theo Dorgan.

Whilst born in New York, Montague came to Ireland as a child and ended up teaching at the University College Cork (UCC) at the invitation of the then Professor of English Seán Lucy. Montague spent almost sixteen years at UCC before teaching in America, Belfast and Dublin. His early work includes Forms of Exile (1958), Poisoned Lands (1961), A Chosen Light (1967) and The Rough Field (1972). By the mid-eighties he found a new publisher, Peter Fallon of Gallery Press, who revitalised Montague’s publishing oeuvre, including his fiction and memoir. Montague was a founding member of Aosdána, a founding president of the Triskel Arts Centre in Cork, and in 2010 he was made Chevalier de la Légion d’honneur in France, also receiving a doctorate from the Sorbonne. He died in 2016 in Nice, France, where he had a home with his third wife, the writer Elizabeth Wassell. Montague counted Samuel Beckett and Seamus Heaney as friends and was a charismatic and generous-spirited mentor to many poets in Cork and beyond, including the Cork-born poet Theo Dorgan. Dorgan, also a member of Aosdána, was a key player in the reimagining of the Cork Film Festival along with Mick Hannigan in the early eighties.