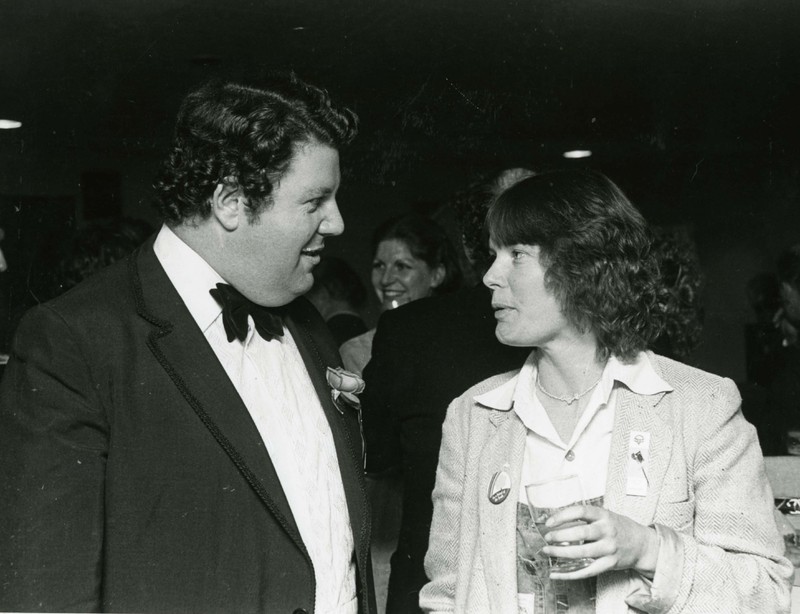 This is a black and white photo of festival director Robin O’Sullivan with the Irish actor Mary Larkin. O’Sullivan, with a rose in the lapel of his jacket, is turned towards Larkin as she speaks to him. Born in Dublin, Larkin played parts in the British thriller film The Internecine Project (Ken Hughes, 1974), BBC drama Wessex Tales (1973) and the Australian miniseries Against the Wind (1978), which ran for 13 episodes. Larkin played the leading role of ‘Mary Mulvane’ in Against the Wind about the transportation of Irish convicts to New South Wales in Australia during the late 18th century. Larkin is married to the Irish stage, film, and television actor Jim Norton who starred as Bishop Brennan in the Channel 4 production Father Ted (1995-1998).

Robin O’Sullivan was the festival director for a few years in the early eighties, after the untimely death of the festival founder Dermot Breen in 1978. O'Sullivan ran the festival on a voluntary basis until Mick Hannigan and Theo Dorgan took up the cudgels in 1985. O’Sullivan originally worked as a journalist for the then-Cork Examiner and for RTÉ news before setting up his own PR company in the early eighties – which has since amalgamated with AM O’Sullivan PR run by his daughter Ann-Marie O’Sullivan. The former festival president Charlie Hennessy acknowledged the contribution of O’Sullivan at the 50th anniversary of the festival noting that O’Sullivan “kept this festival alive when it was in very low water”. (Michael Dwyer, ‘A half-century of movie memories’, irishtimes.com, 11.10.2005; Michael Moynihan, Crisis and Comeback: Cork in the Eighties, The Collins Press, 2018.)