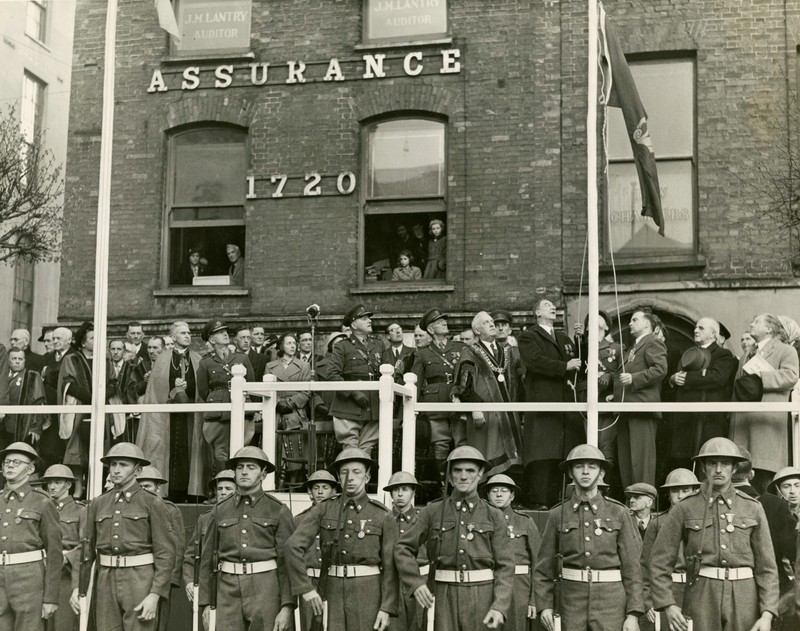 This is a black and white photograph of Éamon de Valera raising the Tóstal flag. While the photograph is not dated we might guess it was taken during the early tenure of his presidency in the fifties, during which time Patrick McGrath served as Lord Mayor of Cork from 1952-1955. De Valera stands on a podium in front of 31 South Mall in Cork, where the London Assurance Corporation 1720 had their Cork Branch. On-lookers look out from the office windows down at the events below. Above we can see the windows of the local accountancy firm Lantry & Co. Uniformed soldiers stand in rows in front of the podium, their right arm slightly raised at their hip bearing arms.

De Valera is accompanied on his right by the Lord Mayor, Patrick McGrath. He is also accompanied by various dignitaries including the film festival organiser Dermot Breen and the then president of University College Cork, Alfred O'Rahilly (1884-1969). The academic O'Rahilly (1884-1969) briefly served as a politician (1943-1954) but was best known for his presidency of the University College Cork from 1943 to 1954. A Sinn Féin supporter, O'Rahilly was interned in Spike Island prison in Cork in 1921 for his political writings. In his capacity as President of the University he would work closely with the Trade Unions and initiated workers' education courses during the late 1940s. On the death of his wife in 1955, he became a priest, and later Monsignor, and would be awarded the Pontifical Order of Saint Gregory the Great by Pope Pius XII which is the highest distinction that can be awarded to a layman by the Catholic Church. The Irish Times noted that he was 'imperious and some considered him comical, but he silenced his detractors with outstanding intellect and scholarship' (06.10.1998). The same Irish Times article records that O'Rahilly contemplated a multi-volume life of Christ prompting his colleague Mgr Padraig de Bruin to observe that 'a life of O'Rahilly by Christ would be much more interesting.' A building at the University has been dedicated to him since 1998.